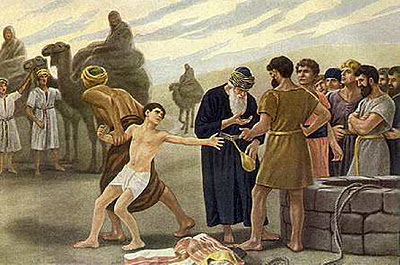 This week’s take away was short and sweet…

In Genesis 37, Joseph’s brothers (sons of Jacob) who despised him and his dreams came up with this plan to get rid of him. If it wasn’t for Reuben sort of swaying their minds, he would’ve been dead. But God…

Joseph was sold to the Egyptians and landed in the hands of the Pharaoh’s. That is, figuratively speaking, because God was really pulling all of the strings. There were some ups and downs throughout the following chapters, but I learned that Joseph’s gift of interpreting dreams eventually worked in his favor – so much that he became the Pharaohs’ right hand man. He warned Pharaoh of upcoming famine and they were able to prepare.

Long story short, people from all over made their way to Egypt for food, including Jo’s brothers. They didn’t even recognize him. They thought he was dead. But the whole time, while they once tried to take his life, he turned around and saved theirs… didn’t even charge them or reveal himself at first.

Here’s the lesson: As much as they try, and even as much as we think we slip up and let them, our enemies will never do to us what God has not ordained. I’m not sure if “test” is the right word, but whatever it is, whatever we’re going through that might suck, God allowed it. We haven’t even hit the Book of Exodus and God already proved we were born with the victory, despite our complex journeys. Here, I saw pride, defeat, humbling, forgiveness. I challenge you this week to, before you snap or even when something good starts to unfold, just look up and acknowledge His plan.

If you need a renewing and want to hop in on the daily reads, see the reading schedule below.

Did you miss Week 1? Click here to catch up.

It’s an exciting time for the group of siblings.