Notice: Trying to get property 'user_email' of non-object in /var/www/wp-content/plugins/slider-by-supsystic/src/SupsysticSlider/Core/Module.php on line 142
 Chicago Mass Choir President Talks 'We Give You Praise' 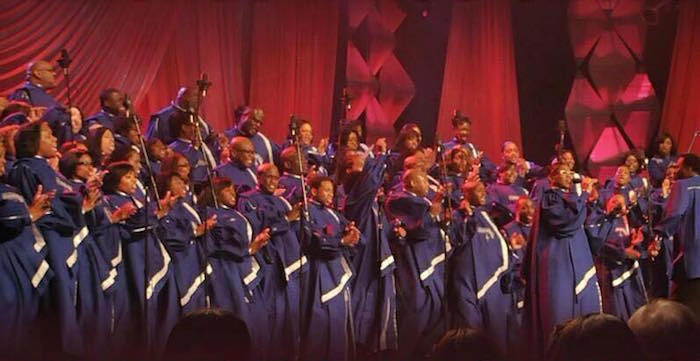 Back in 1971, James C. Chambers had a vision to unite inspirational music lovers across the board with the Ecclesiastes Community Choir (ECC) in Chicago. That included singers, songwriters, musicians and whatever else you can imagine, musically. His vision expanded to the creation of the Chicago Mass Choir in 1990, and 26 years later, they’re gearing up to release their 16th album.

How does the traditional choir stay relevant? Simple. By staying true to what they know and embracing the real message for a higher purpose, they produce an incomparable sound that, much like their name, draws a mass.

“We’ve been consistent with what God has blessed us to do,” Chicago Mass Choir President and CEO Dr. Feranda Williamson said about the organization’s growth and expansion. “Some say traditional gospel is has been, choirs are a thing of the past, but we say, not so. We know that it’s evangelism and there are people that are uplifted and encouraged by our music. It takes all genres together to reach out and evangelize so we know that God is not through with us yet.”

Hence, the upcoming album, We Give You Praise.

Due April 15, We Give You Praise is co-produced by Percy and Jeral Gray. It features the lead single, “Thank You Thank You Jesus,” and comes just in time for Chicago Mass Choir’s annual Spring concert.

Dr. Williamson, who’s actually an original member of Chicago Mass Choir, provides a deeper look inside the new project in the exclusive interview below…

ALIYA FAUST: You’ve been with the choir from the very start. How’s that been over the years? Seeing the growth…
DR. FERANDA WILLIAMSON: I tell people our founder, unfortunately he passed, he birthed the baby and I raised the baby, in terms of Chicago Mass Choir. Just to go from early teens and to see a vision become a reality, and I think it went beyond our expectations. When I say that, we are able to minister across the United States as well as internationally.

Exactly how many people are in the choir?
We have an active membership of 80.

Wow. That’s a lot of people!
It is, and it takes a lot of organization. I have an awesome professional team of officers that work very dilligently and we have committees. It really takes everyone; it’s team work.

What’s your favorite Chicago Mass Choir memory so far?
The first time we recorded. A lot of people don’t realize that, for the first couple of years, we were a workshop choir. The organization itself is 28-years-old and then we branched off into Chicago Mass Choir – a record producer attended one of the musicals and at the end of the workshop, made the suggestion that we needed to record – so for that very first recording, we were so excited. We were at one of the community colleges here in Chicago.

The second was the first time we toured abroad. I became president, I told the members to get passports and I’ll tell you, it took 10 years before that first tour abroad, it was almost to the point where my passport was getting ready to expire, and then God opened the door. I was able to take over 45 people on that first tour.

Well, congrats on the upcoming album no. 16. What can we expect from it?
We give you praise [and] our traditional base. We’re going to take you to church with the encouragement and clapping, praise and worship. We’ve got a little contemporary but we’re true to our base and songs that can be sung on any given Sunday morning service. Choirs throughout the years can’t wait to get a release from Chicago Mass Choir because it’s music that they’re able to teach their choirs.

So it’s kind of a mix between new songs with those traditional?
Absolutely.

What’s the songwriting process like in such a large group?
Well we’ve got our producer Percy Gray who throughout the years has actually been the main writer for the organization. The majority of the songs you hear like “You Love Me,” “I Can Go to the Rock,” even our new release, “Thank You Thank You Jesus,” they were all written by Percy. We do have other song writers, but he has really blessed the organization with his writing.

Speaking of “Thank You Thank You Jesus,” what made you guys choose this song as the first single?
It’s so encouraging because we see so much violence that’s going on in the world. Not only the attacks on the body of Christ, but even non-believers. We’re seeing young kids being murdered, but in spite of all of that, we still can thank God because he still continues to allow us to wake up for a new day, bless our families. We have to be more thankful for God’s blessings, so thank you, thank you Jesus.

Listen to Chicago Mass Choir’s new single, “Thank You Thank You Jesus” below, and for more information on upcoming tour dates, visit chicagomasschoir.com.

Ms. Anita Wilson is working hard and in just a few weeks, you’ll be able to hear the fruits of her labor on this upcoming album — details inside!