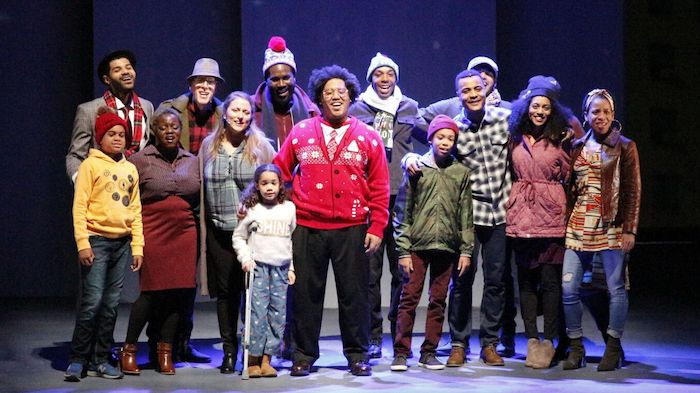 If you’re based in or visiting the New York City area, here’s something to add to your to-do list for the holidays: “A Christmas Carol in Harlem.”

Based on the famous novel by Charles Dickens, the re-imaged production embraces the culture of the historic neighborhood while highlighting a few issues New Yorkers face in this day and age. In showing how misfortune paired with gentrification changed the energy of Harlem through the example of one man’s story, emotional scenes related to Christmas time aim to bring life back to the people’s movement Harlem was once known for.

The modern day Ebenezer Scrooge is depicted as a big-time real estate who isn’t too concerned with the well-being of the community he grew up in. Though this wasn’t always the case, he now hates the holidays and carries himself mean. People around him try to open him up to love and togetherness, but he isn’t open to hearing it until he’s visited by three “ghosts” on Christmas Eve.

“I believe that ‘A Christmas Carol in Harlem’ will become a classic, seasonal offering on par with other beloved, locally based holiday productions,” Ty Jones, Classical Theatre of Harlem’s Producing Artistic Director, said. “Shawn René Graham has taken Dickens’ classic to show how a community is healed, one family at a time and exemplifies how ordinary people can do extraordinary things to help one another receive the gift of love at Christmas time.”

You’re guaranteed to laugh, relate, get inspired, gain a sense of pride in culture and maybe even shed a thug tear while watching the applause worthy holiday production.

“We are on the precipice of the 100th anniversary of the Harlem Renaissance. What a remarkable opportunity to launch into the next century by complementing the existing holiday programming downtown, with a show that has a unique uptown, New York City aesthetic,” he continued.

The 90 minute show – adapted by Shawn Rene Graham, directed by Steve H. Broadnax III, choreographed by Tiffany Rea-Fisher and presented by The Classical Theatre of Harlem – is currently playing at the City College Center for the Arts’ Aaron Davis Hall in Harlem now through December 8.

For more info and a complete list of show times, click here. And watch our review below.

June 17 and June 19 will forever be days to remember.