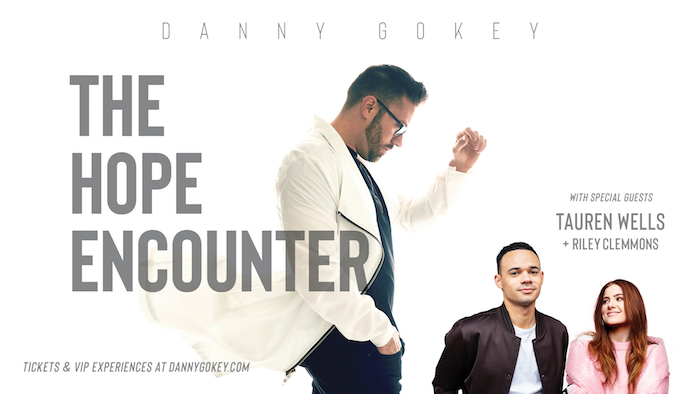 “It’s been a dream of mine since American Idol to headline my own major tour,” says Gokey. “That platform opened my eyes to the power of mixing hope with entertainment. Hearing a message of hope at just the right time can truly make an impact in someone’s life.”

“The process of creating the tour has really been awesome,” says Gokey. “I can’t wait to hit the stage with Tauren and Riley – they are both crazy good and I love their fresh sound.  We’ve also brought in uber-creative director Laurieann Gibson, who has worked with everyone from Michael Jackson to Katy Perry, to design the show and help me take it to another level.”

Gokey became a favorite of millions of fans as a Top 3 finalist on Season 8 of American Idol.   His first album, My Best Days, debuted at #4 on the Billboard Top 200 album chart. Since then, the Wisconsin native has celebrated a series of #1 album debuts, including his first award-winning holiday album, Christmas Is Here, as well as singles including the recently Gold-certified “Tell Your Heart to Beat Again” and “Hope In Front of Me.”

Tauren Wells, a four-time GRAMMY® nominee, debuted Hills and Valleys — his first full-length solo project — in July 2017, just prior to hitting arenas on the Lionel Richie/Mariah Carey 22-city “All the Hits Tour.” The album’s title track was one of the most streamed Christian songs of 2017, according to Spotify, and currently registers over 50 million total streams.

Wells made history earlier this year by landing singles in both the #1 (“All My Hope (ft. Tauren Wells)” by Crowder) and #2 (“When We Pray”) spots simultaneously on national radio charts.

Riley Clemmons is an 18-year-old, Nashville-based singer/songwriter signed to Capitol Christian Music Group. Her debut single, “Broken Prayers,” skyrocketed at radio upon its release in early 2018 and the music video earned over a million views on YouTube in less than two months. The single has now crossed over ten million global streams.

Most recently, Riley was featured on the song and music video for Social Club Misfit’s radio single “Misfit Anthem” and mainstream DJ, Tritonal’s “Out My Mind.” Her upcoming full-length debut album releases August 3, 2018.

*Dates subject to change without notice