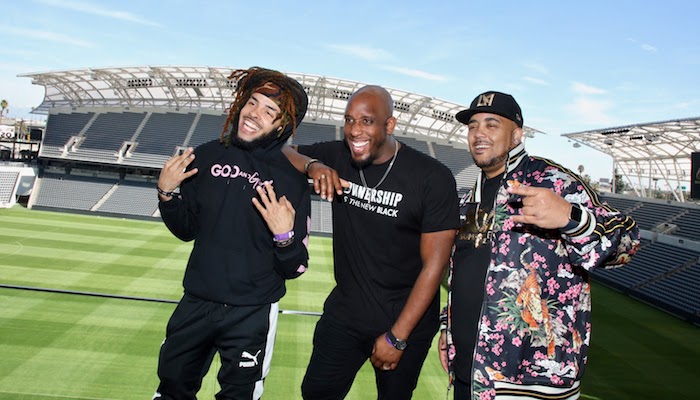 Chris Chicago, Kurtis Blow and Willie Moore Jr. are locked in to host, while a total of 65 artists join the performing lineup.

Headliners Dee-1 and Derek Minor as well as DJ Standout, one of the 20/20 Summer Fest deejays, attended the press conference and shared their excitement to be participating in the event.

Derek Minor says his involvement with the festival is affirming. “It’s super crazy to think that we’d be playing in a venue of this magnitude,” says the “Change the World” artist. “It’s humbling number one, but it also testifies to the impact of being honest and true and authentic. I think a lot of times people think that you have to fit into the mold of what every else does but I’m thankful that we’ve been able to stay true and authentic to who we are and glory pour on us.”

Dee-1, a former middle teacher in New Orleans, says being a headlining artist for 20/20 Summer Fest and performing at the Banc of California Stadium feels like a dream. “Honestly, it’s crazy to look behind me and see a huge stadium like that,” the “Sallie Mae Back” rapper says about the 20,000-plus seat venue. “My students didn’t believe me when I told them Mr. Augustine aka Dee-1 was not only going to make it but was not going to compromise anything I stand for. God is still going to be first in my music.” He added that the festival confirms that the genre has “made it.”

DJ Standout applauds the 20/20 Summer Fest Executive Producers Aulsondro “Novelist” Hamilton aka Emcee N.I.C.E. and Chantal “Chanie G” Grayson’s commitment to grow the festival. “The beauty of it is that Emcee N.I.C.E. and  Chanie, you guys have put it all together,” he says. “It’s not just a one year thing. You have a vision for this to be a year after year thing and for it to grow. I’m just excited for the momentum that dreaming this big can be great for the culture and all the things we are working on it.”

Hamilton and Grayson’s God’s House of Hip Hop (GH3 Radio) which boasts 24/7 programming of Christian Hip Hop (CHH), Latin CHH, and Gospel Hip Hop music has been nominated for the 2020 Stellar Awards Internet Station of the Year. Last year, GH3 Radio won Hip Hop Station of the Year. God’s House of Hip Hop celebrated its one year anniversary in August. The station was nominated for 11 and won 3 The Spin Awards (Best New Station of the Year, Best Radio Show Two or More Hosts, Internet Radio Personality of the Year). The ground-breaking platform was honored with a Steeple Awards nomination for Urban Inspirational Artist of the Year (Emcee N.I.C.E.) and two Kingdom Choice Awards nominations.

Hillsong to return to the U.S. for the first time in almost three years!