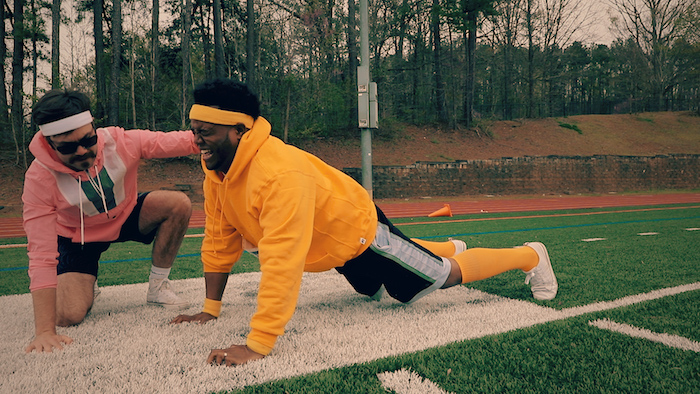 GodFrame has released a new vibey track called “Aquafina,” just in time for the warm weather that’s breaking and everything that comes with it. It’s a song about overcoming temptation.

“The whole point of the song is that while there are many pleasures, vices, and temptations in this world that temporarily satisfy – we can only find lasting love and fulfillment in Christ. He’s our living water,” GodFrame says.

The video, which was produced and directed by GodFrame’s media production group Lamar Haaley Creative, is a symbolic representation of someone trying to lose weight.

“The weather’s getting warmer (even though it was freakishly chilly the day we shot this), people are going on spring break, doing more fun stuff outdoors, so I wanted to do something fun that still had a message. I made the beat three years ago while sitting in my car using bluetooth because I didn’t have a studio setup. It’s become one of my favorite songs on Hello Jesus, so I’m glad we took a shot a creating a visual for it.”

He continued: “There’s definitely more to it than us acting goofy,” he says. “There’s like seven or eight hidden gems in there. For example: If you look at the numbers on my racer bib (4514) and match them up with letters of the alphabet, it spells ‘DEAD’ because that’s what we are without Christ. But the good news is that while we were still dead in our sins, Christ gave His life for us at just the right time … The personal trainer’s role also has some hidden meaning, but I’ll wait to see if anyone figures that part out before I say anything.”

Tori Kelly is going on tour!