Notice: Trying to get property 'user_email' of non-object in /var/www/wp-content/plugins/slider-by-supsystic/src/SupsysticSlider/Core/Module.php on line 142
 Best Reactions To ‘Greenleaf’ Season 5 Premiere - GospelGoodies.com 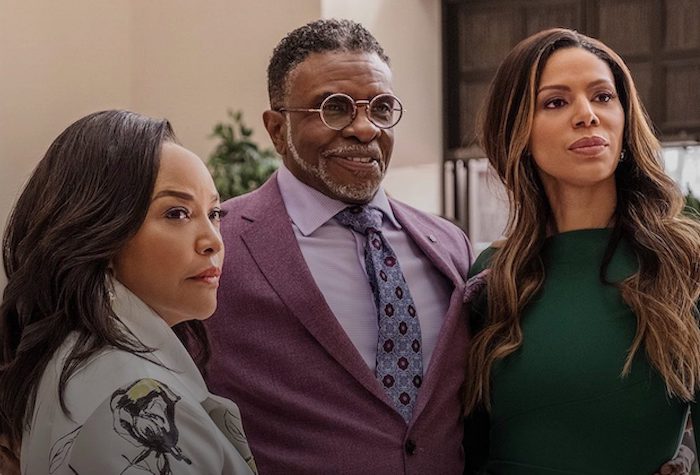 Greenleaf season 5 premiered on OWN last night and it’s already off to a spicy start!

One (or two?!) of Grace’s sons passed away, Charity’s petty level advanced, Sophia got her heartbroken (again), Jacob might have a side baby and Kerissa is being extra messy.

Can you believe this season will be the show’s last? Be sure to enjoy the final episodes of Greenleaf and check out the best reactions to the finale season opener below…

#Greenleaf this season is already starting off messy and I’m here for every minute of it! pic.twitter.com/L7X9gw3vhx

My baby nekkid!!! And this boy is two timing her??? Ooooh Dante’s gonna catch these hands! You know Grace is a killer? #Greenleaf

If AJ survives, watch him need a blood transfusion, they ask Grace for her blood, and then BOOM. Not a match. #Greenleaf pic.twitter.com/NSXimhF9Jz

Gigi so blind my sister open your eyes that’s not the real Aj #Greenleaf pic.twitter.com/oRyrmke8RT

10 minutes in and Charity and Clarissa are already working my last nerve ???? #Greenleaf pic.twitter.com/m9TNqXugVl

Jacob looking at that toddler trynna figure out if she reallyyyy light brown or just reallyyyyy dark white #Greenleaf pic.twitter.com/sbqdhVKmNG

Charity sold out her family for a job but can’t understand why Phil sold her out for… a job. Girl, pawn that ring and sit down somewhere. #greenleaf

It's DEEPLY disturbing me how Zora keeps trying to guilt Sophia because she's talking to Dante. Has she conveniently forgotten that Sophia liked Isiah first and she stole him right from under her? #Greenleaf #GreenleafOWN pic.twitter.com/gr9IfOJBCG

Preparing myself to fight against Charities spiritual wickedness during this season premiere of #Greenleaf pic.twitter.com/8UwDVtbd2W

Jacob took a page out of his mother's book of shade!! "Ya man out here passing out wills & chlamydia" ????????#greenleaf pic.twitter.com/XrzsD54fpN

Just got through watching season 5 episode 1 of #Greenleaf and all I can say is pic.twitter.com/TWli3lZLoc