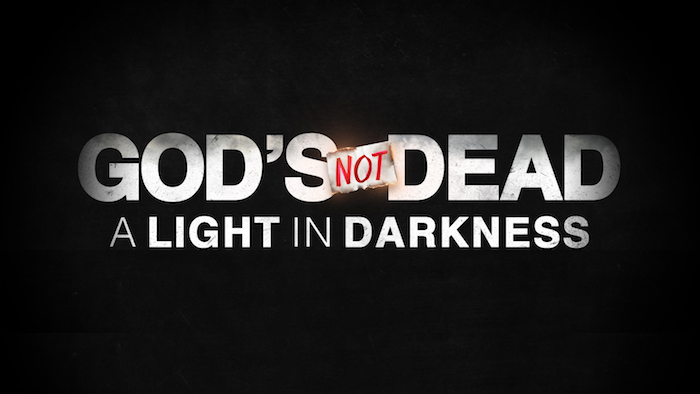 SCOTTSDALE, Arizona. January 19, 2018 – PURE FLIX, the leading independentfaith and family film studio, announces the completion of principal photography for GOD’S NOT DEAD: A LIGHT IN DARKNESS, scheduled to release in theaters on Easter, March 30, 2018.

GOD’S NOT DEAD: A LIGHT IN DARKNESS is an inspirational drama that centers on Pastor Dave (David A.R. White) and the unimaginable tragedy he endures when his church, located on the grounds of the local university, is burned down.

But his dreams of rebuilding the church face an unexpected setback when university officials reject his plans to rebuild, determining that the church is no longer relevant in today’s society.

Trusting in the motto that he has lived by that “God is good all the time,” Pastor Dave enlists the legal help of his estranged brother Pearce (John Corbett), who is an attorney but also an atheist.

As they partner together for a united cause, the brothers come to understand that not every victory requires defeating the opposition, and there is a greater win when you heal and rebuild with compassion and respect for others.

“Audiences have continued to show support and interest in the GOD’S NOT DEAD films and their relatable characters who endure similar challenges in their personal faith and lives,” says Michael Scott, PureFlix founding partner. “Our hope is that these films offer entertainment andencouragement, with a starting point for sharing faith in a respectable andcompassionate manner.”

GOD’S NOT DEAD: A LIGHT IN DARKNESS is the latest addition in the filmfranchise, which started with GOD’S NOT DEAD, the highest-grossing independent faith film of 2014, taking in more than $60 million at the box office.

GOD’S NOT DEAD: A LIGHT IN DARKNESS is directed by Michael Mason; produced by David A.R. White, Michael Scott, Brittany Yost, Elizabeth Travis, and Alysoun Wolfe; and executive produced by Troy Duhonand Robert Katz.
Moviegoers can follow the film on the official website at GodsNotDead.com, on Facebook at facebook.com/GodsNotDeadTheMovie, or on Twitter @GodsNotDeadFilm.

J Moss and his wife Mel are gearing up to open their very own church.