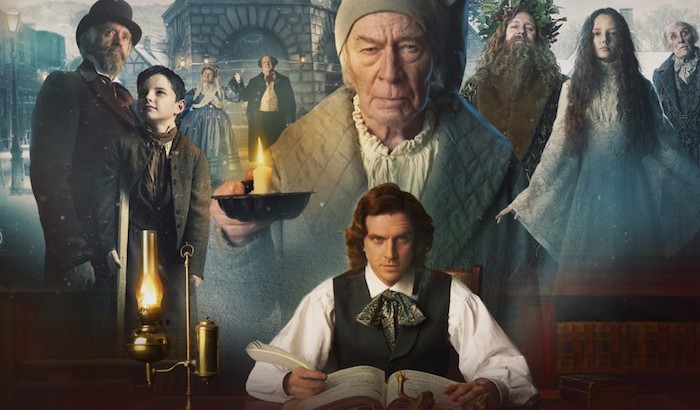 If you’ve ever wondered what inspired Charles Dickens to write ‘A Christmas Carol,’ The Man Who Invented Christmas tells the unique story of the process through a creatively exaggerated tale of compassion.

“There’s a magical quality in a Christmas Carol. We elevated things. [Dickens] was famous for creating voices in the room. All we did is take it one stage further and had the visual depiction of the thing inside his head. We pushed it a little bit for cinema,” the movie director, Bharat Nalluri said. “There’s a high degree of historical accuracy. We have two people in the film: Miriam Margolyes and Simon Callow who are the top Dickensian experts in the world.”

When you think of Christmas, you think of the birth of Jesus, family and etc. While the movie doesn’t dig into the spiritual side of the celebration, it does touch on the holiday spirit of the season. For the normally humorous Dickens in the mid-1800s though, it was a little dark. With pressure to produce another hit, Dickens had only a few weeks to write what would become one of the greatest Christmas tales ever told. It came with sacrifice and strained relationships, but Dickens used the disconnect in real life to create a personal connection with his novel characters who came alive and too close for comfort, as Ebenezer Scrooge’s vibes almost interfered with Dickens’ happy ending in both.

Dan Stevens, who played Dickens, says he can relate.

“I felt the tension he seemed to be carrying and his manic energy had an exhausting affect at times. There’s something universal about the artistic and creative process in our story. The idea of a man with great ambition who had really high moral aims [regarding] what he was writing about. Really trying to achieve that constantly at every turn and maybe not quite making it,” he said in a convo we had in New York City in preparation for the movie premiere. “It’s watching someone run up on creative blocks and find a way to unpick them but not only that but putting himself under great time pressure to say ‘I’m going to write a Christmas book by this Christmas.’ It was an extraordinary thing to do. He defied conventional publishing rules and he also defined conventional literary style. He was the first to do it.”

Both Stevens and Nalluri say they were drawn to the movie because of its hope for mankind.

“It’s still sad that we’re talking about the dichotomies of the world: the haves and the have-nots. It’s the best of times and it’s the worst of times. All of [Dickens’] work is about that. We live in interesting times, similarly,” Nalluri said. “I see why people revisit ‘A Christmas Carol.’ I think we’re driven to goodness. I think that’s how we all survive as society. I think that’s the genius of Dickens. He keeps reminding us that goodness is possible. There’s great humanism in his writing.”

It’s a story the whole family could learn from.

Read on for more from our talk with Dan Stevens and Director Bharat Nalluri below, and catch The Man Who Invented Christmas when it hits theaters everywhere this Thanksgiving 2017.

Prepping for the role as Charles Dickens…
DAN STEVENS: I was looking Dickens biographically and his early works. I had an academic knowledge of him. There’s a difference between studying “David Copperfield” and actually thinking about the man behind the story and what inspired him to write that. I really like the idea of dusting off someone like him and bringing him to a new audience. We don’t want to lose touch with our great literary works.

Christian principals in the movie…
BHARAT NALLURI: In terms of religion, there’s no getting away. Charles Dickens was a Christian. I think some of his moral values were from that. It was an element of that, that came through. I think a lot of that came from his father who was a generous man even though he was not very good at managing money. I think he caught a little bit of that. I think the genius of Dickens and the reason why his books are translated across the world in many languages is because at the end of it all it’s universal human truths really. It’s a combination of how we should all work together as a society. Underneath it all, it’s great fun. You get seven books. People were waiting on the jetties in New York for the next chapter of the book because it was so compelling in terms of storytelling. He didn’t realize underneath it, he was affecting society. I think it was because the shoe was on the other foot during his childhood. It’s a rare thing to be able to see both sides and to build New York and let us all in on that world. What he did was so genius. I just didn’t want to let him down.

DAN STEVENS: I don’t think it’s a religious tale. I think he taps into something that’s both Christian and also universal. There’s something about that, the celebration in the winter solstice that appeals to the Christian fathers as much as Dickens: in that very darkest moment, the light will return.

BHARAT NALLURI: We all want to be better people; that’s who we are. It’s like a therapist journey. He goes back and he looks at himself and all the bits that made him. We mirror Dickens’ journey. It’s exactly the same. We go back into Charles’ past, present and future. Charles decides to forgive certain things in his past and becomes a better person for it. That releases him to write about Scrooge and do the same thing. That’s what we’re trying to capture.

Their Christmas traditions…
DAN STEVENS: We sit down every Christmas Eve and watch “The Muppet Christmas Carol.” That’s a firm fixture in our household. We celebrate a pretty traditional Christmas. It’s about family getting together. We play a lot of board games.

BHARAT NALLURI: I’m lucky. I have a lovely family in Australia that really celebrate it. So, we’re usually on the beach with a barbecue thinking about all of the snowy places we could be instead. But being so far away makes you think of the people who aren’t with you. That’s the great thing about Christmas and the tradition I really like: the moment where you can think about everyone at the table.

Today marks the release of 21:03‘s fourth album Outsiders and group singers/dancers Evin and Torrence are confidently embracing their matured sound on the project, which…