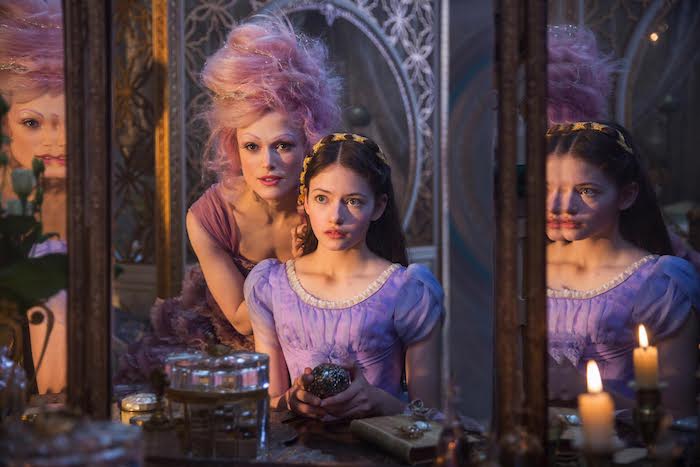 (Keira Knightley is the Sugar Plum Fairy and Mackenzie Foy is Clara in Disney’s THE NUTCRACKER AND THE FOUR REALMS.)

The Nutcracker and the Four Realms is nothing close to what you’d expect. Not to us, at least.

Just in time for the holiday season, the film opens up with a Christmas scene that’s a bit sad as the main character Clara and her family mourn the loss of their matriarch, but it still gives off festive vibes. Clara’s mother left her a gift that would ultimately change her life and decide the fate of well, a whole nation. From mouses to toys, every little detail in the beginning is symbolic for later scenes.

Clara’s gift leads her into The Four Realms where she befriends a Nutcracker on guard and a frenemy from Candy Land. She consequently ends up fulfilling a mission she didn’t even see coming and walks away healed from the weight she carried after losing  her mother.

For younger watchers, the life-like characters add an innocent blanket to the movie that covers the curiosity of children, and for older watchers, the nostalgic storyline allows room for a playful imagination and tugs at a few emotions from different perspectives. For both, the theatrics are a bonus — the costumes and special effects rank 10, and ballet dancer Misty Copeland’s welcoming dramatic ballerina routine warrants a round of applause.

As a whole, the PG movie is a fun tale the entire family can enjoy and learn from together as the holiday season approaches. It boasts lessons on loyalty and sacrifice, but most of all, how one’s self-confidence and life-choices hold enough power to effect change for the good and for the bad.

Catch The Nutcracker & The Four Realms when it hits theaters Friday, November 2!

The Stellar Awards took a backseat to coronavirus last year, but it’s back now!