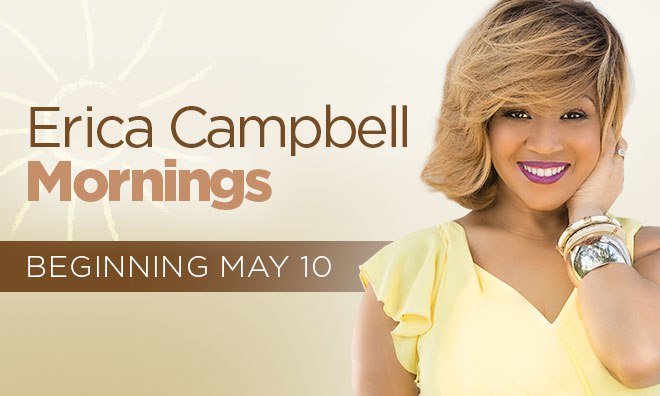 Congratulations are in order for Erica Campbell who just landed her own syndicated radio morning show!

“Erica has mastered her craft in music and she’s winning in reality TV and even social media,” Reach Media CEO David Kantor said in a statement. “I’m glad Reach Media and  Radio One can provide her access to syndicated radio – another media to dominate and share her inspirational voice.”

Reach Media, the syndication company that housed “The Yolanda Adams Morning Show,” made the announcement just a few days after breaking news that The Yolanda Adams Morning Show’s contract would not be renewed after almost 10 years on-air.  It was the first-ever gospel show to be syndicated nationally and since launching in 2007, had been broadcasted at 38 radio stations across the country.

RELATED: The Yolanda Adams Morning Show Comes to An End

The torch has been passed…

“I’m grateful to Reach Media, Radio One, Dan Otero of Globe Star Media and Warryn Campbell, CEO of My Block Records for believing in me and my ability to inspire America to get up,” Campbell said.

Titled respectively, “Get Up! Mornings with Erica Campbell” debuts May 10 and will continue on weekdays, 6 a.m. – 10 a.m. on Radio One’s inspiration stations.

Take a listen to “Pray For Real” inside…