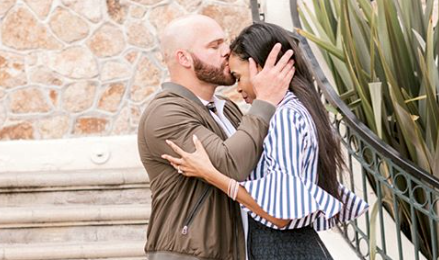 Michelle Williams is officially off the market and engaged to pastor and life coach Chad Johnson after a year of dating.

The gospel singer and Destiny’s Child member took to social media to share the exciting news, thanking PEOPLE magazine for breaking the story. Turns out, Johnson actually proposed a month ago!

That time I got engaged March 21st and @people is telling y’all alllll about it!! Thank you @people and @nelson_jeff!!! ❤️?❤️ https://t.co/7ypcKYuldS

PEOPLE.com reports:
Williams met her husband-to-be in March of 2017, when she attended a spiritual retreat in Arizona run by Johnson, a pastor and life coach who has also worked as a chaplain for pro sports teams including the Pittsburgh Steelers and L.A. Dodgers…When Johnson knew he wanted to propose, he planned an elaborate ploy to involve Williams’s family in popping the question. Last month, he secretly traveled to her native Rockford, Illinois, to ask for her clan’s blessing — and videotaped the entire trip! Then on March 21 — exactly one year after Johnson flirted with Williams and he accused her of dissing him — Johnson returned to the Pebble Beach, California, hotel where he began their texting banter.